One of our rites of Spring is to head to the beach looking for migrating Red Knots.  We discovered our first Red Knots while on a Mother's Day beach trip to Ocracoke in 2007.  We were captivated by these birds with Salmon-red plumage frenetically running in unison at the water's edge.  They were beautiful and challenging to photograph - fast, back-lit (since Ocracoke is South-facing), and since they run as a group it's nearly impossible to keep them all in focus.  I took a lot of shots, but only a couple were keepers.  We were hooked and 7 years and lots of images later, we are still looking for that perfect Red Knot image. 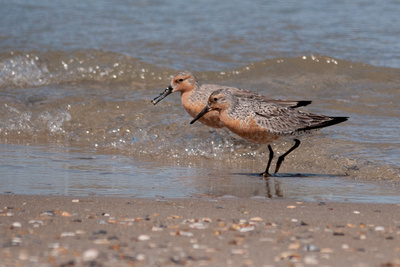 If you're not yet familiar with Red Knots, they make one of the longest annual bird migrations, wintering in Terra Del Fuego at the southern tip of South America and flying ~9,000 miles, north to the Arctic to breed.  Critical to their marathon migration is a May/June stop in Delaware Bay where thousands of Red Knots gather to feast on the eggs of spawning Horseshoe Crabs.

Some Red Knots skip the long flight and winter locally and we found large flocks on Ocracoke Beach last November (top photo) and again in March.  That was a surprise (for us anyway), but not unusual.   Our first Spring sighting was of this single pair of Red Knots in breeding plumage on May 11th north of Corolla, NC.  That was exciting. They were on the move and in perfect afternoon light.

We recently did a May trip to Ocracoke, Portsmouth Island and to Swansboro, and Red Knots were easy to find.

We left mid week and were surprised that we had to wait for the Hatteras/Ocracoke Ferry, even though the summer schedule had begun (ferries every 30 minutes) and it was still off season.  We found a few Red Knots on the north end of Ocracoke Island and then headed into town.  As evening approached we used Ramp 72 to access the Ocracoke Inlet Point.  Ramp 72 is always interesting and we found baby Mallard Ducks and a Black-necked Stilt searching for food in the marsh.

When we reached the beach, there were no Red Knots to the south, so we turned north. It was late with the sky turning pink.  No Red Knots, but flying right at us were two adult Black Skimmers right at the water's edge.  Skimmers are my most favorite shorebird.  They are barnstorming flyers, fun to watch and hard to photograph.  I was able to snap a few shots and was amazed that some were actually in focus.  We see Skimmers at Oregon Inlet (and look for them), but this was the first time seeing them on Ocracoke, a real bonus.

With the sun setting we left the beach and were treated to a spectacular sunset over Silver Lake. 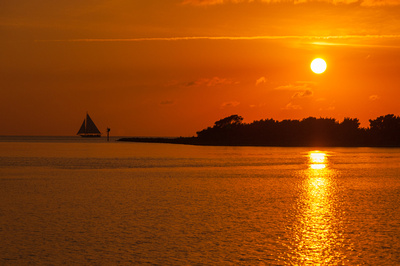 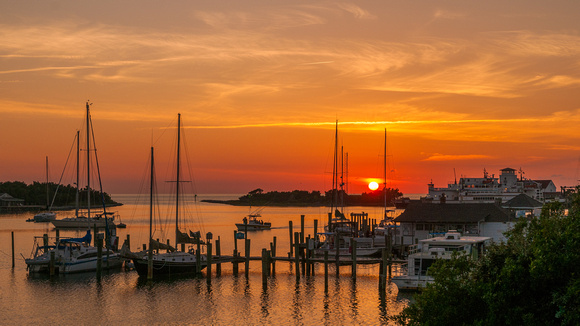 The following morning, we took a ride to Portsmouth Island.  Our second visit and a bargain at $20 round trip.  The Island is part of the Cape Lookout National Seashore and Portsmouth Village, which thrived in 1800's, is pretty much left as it was when the last person went off island in 1971.   We had four hours to tour, which was not enough time but we did get a few nice shots of the village.  I'm particularly pleased with the image of the Life Saving Service Station with the storm clouds building in the distance. 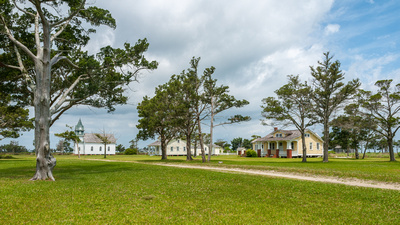 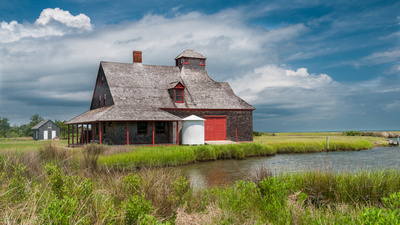 After walking through the village, we had to walk a little 3.5 miles to the beach to meet the boat for our return.   Portsmouth Island is known for the veracity of its mosquitoes but we had been lucky there had been a bit of a breeze and our repellent seemed to be working, until we reached the trail to the beach - during that half mile walk from the Lifesaving Service Station through shrubs the to the open sand dunes, we were bombarded by hundreds of bugs, not mosquitoes but biting green headed flies (they're worse).  We couldn't swat them fast enough or walk fast enough to get through them - but fortunately for us, we didn't get bit. 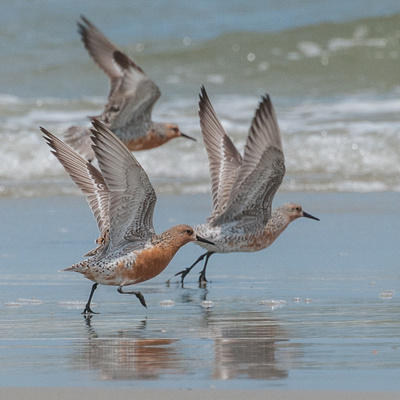 When we made it to the  beach, it wasn't long before we started seeing Red Knots - even met a Ornithologist with the National Park Service who was counting Red Knots and had just counted a flock of 105.  They were in constant motion and didn't let us get very close for pictures, but I did get this nice image of three taking flight.

Back in Ocracoke the weather changed with the night-time passing of a major storm front bringing rain and winds. Since our Cedar Island Ferry was delayed, we had time to head back to the beach at the north end of Ocracoke Island where again we found more Red Knots. Using our truck as a moving blind, we were able to stay dry and to get pretty close and captured a few images including this short video. 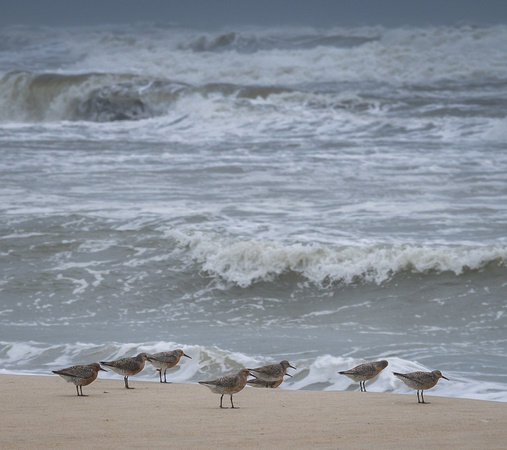 We took the Cedar Island Ferry and spent the night in Swansboro.  Peg headed to a meeting, while I took the ferry to Bear Island at Hammocks Beach State Park which is a NC state gem, a State Park with great facilities that's accessible only by passenger ferry or private boat.  After being delivered to Bear Island, its a half mile walk to the beautiful fine sand beach.  I was just out exploring and had no expectations, but shortly after arriving I met up with a flock of about 10 Red Knots, and for the most part they were too busy to notice me.  So I was able to sit on the beach and snap photos.  It was noon, so the lighting was terrible, but every once in a while they would turn to the light. That was as close to a group of Red Knots as I've ever been.  This is one of my favorite photos(1/2000 sec, f6.7, ISO 400).

So in our three day trip, we covered ~170 miles of North Carolina Beaches and found northward migrating Red Knots at most every stop.  We hope they make it to Delaware for the feast of the Horseshoe Crabs and then on to the Arctic.

There are lots of Red Knot resources on the web:

The Cornell Lab of Ornithology is a good starting place

Track their sightings on ebird

Learn about their Delaware Bay feast from Delaware Audubon