Memories of an Outer Banks White Christmas and a Shipwreck

Christmas on the Outer Banks is always special. Our visitors are gone, winter has yet to set in, our winter birds are here and the beaches are deserted and great for beachcombing.  Most Outer Banks residents like that it doesn't snow much here. However around Christmas, some of us displaced northerners wish for the magic of a white Christmas, knowing full well that it never happens.

1989 was a long time ago, before digital cameras (I had an Olympus OM-2), before the internet, even before cable TV (we had just 4 channels, if we were lucky). 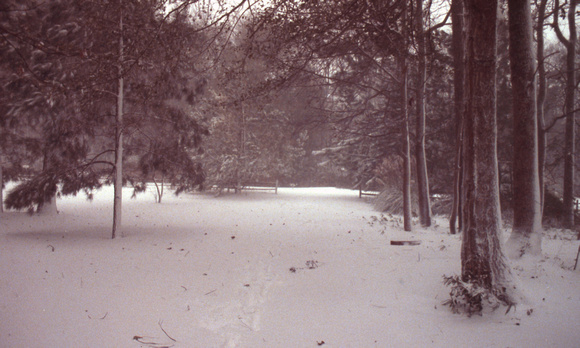 Looking out the window Christmas Eve 1989

The snow started on Christmas Eve and began piling up. It was a classic Outer Banks Nor'easter with howling winds and blowing snow. My parents were visiting from Illinois and I still remember my Dad's comment, “If I had wanted snow I would have stayed home.” Boy that would have been a mistake. At the time I had a new 4-wheel drive truck and the storm gave me the first opportunity to try it in the snow – and it worked great.  Good thing too since eventually we had ~16 inches of snow and there are no snow plows here. So back in the woods 4-wheel drive was the only way out.  Looking for an excuse to drive, I did a last minute shopping trip to the drugstore looking for a camera for our youngest daughter (always good to get an early start in photography).

It was a big storm which peaked on the 24th with winds at the coast in excess of 50 mph and 20 ft waves. Strangely it only snowed south of Norfolk, VA, far south – all the way to Wilmington, NC. While we were tucked in our beds waiting for Santa to arrive, out on the Atlantic a Navy Oiler, the USNS Benjamin Isherwood (T-AO-191) was under tow from Philadelphia....and things were not going well. 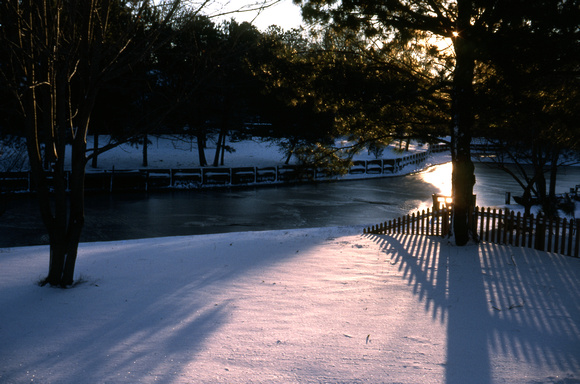 We awoke to a winter wonderland with snow everywhere. The sun was out and it was an absolutely beautiful morning and a memorable white Christmas for the Outer Banks. The presents surrounding the tree were quickly opened and enjoyed by all. During the day we learned that a big ship had run around, so we bundled up and headed north to Ocean Sands, just south of Corolla.

The Benjamin Isherwood had broken its towline in the storm and repeated attempts to reconnect were unsuccessful. With just a few people on board, the ship simply drifted ashore and as the storm abated and the water level fell, she became firmly stuck in the sand. The crew was safely lifted off by helicopter unharmed, but for them it had to have been a most memorable, albeit scary Christmas Eve. 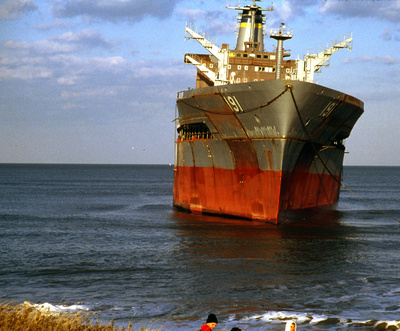 The Navy Oiler aground off Ocean Sands, NC 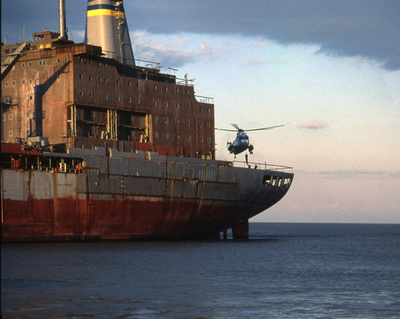 Helicopter moving the crew off of the stricken ship

When we arrived in the afternoon, the sun was out and the waves were gone.  It was not hard finding the Benjamin Isherwood as she towered above the oceanfront homes. It was an amazing sight. It even looked to me like the ship was bowed a bit by sitting on the sandbar. The Outer Banks is known as the Graveyard of the Atlantic, a title earned from the thousands of shipwrecks that have occurred here – but a shipwreck is an unusual event today (much like a white Christmas). So we soaked it in and marveled at the sight of this giant ship so close to shore. 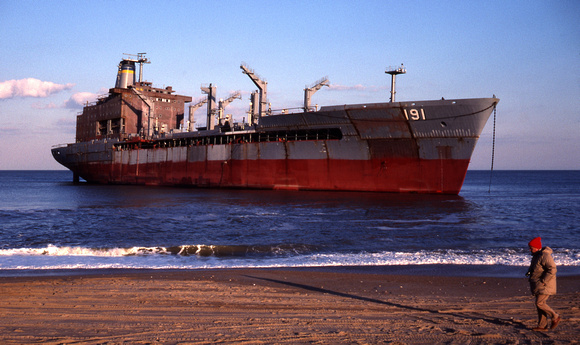 My Dad on the beach with the Benjamin Isherwood

Because it was so close I thought it would be there for a long while, but a couple of weeks later, it was gone, pulled offshore during a high spring tide. The Navy was lucky. The  Benjamin Isherwood was not so lucky and never saw service, read that story here.

It's been fun remembering, I hope you've enjoyed the story and the photos. Let me know if you were there.

Have a wonderful holiday, give your family a hug and take photos.

Dean Severdija(non-registered)
I believe The Sheila Moran was towing her , we picked her up in PA. and was headed to Tampa for repair , If I am correct I was on the tug when the Cable parted ,due to the captains Error , if this is the one I have the whole story to tell .Let me know
Mark Thacker(non-registered)
I remember that snow storm. I was living in KDH on Village Lane.
Bobbi Jean Bell(non-registered)
What a great memory with terrific photos! How exciting that you are "blogging" now - look forward to your next post! Looking forward to reading about memories of Western adventures - Yosemite? Grand Canyon? Bring it on!
No comments posted.
Loading...
Subscribe
RSS
Recent Posts
New 2015 Outer Banks In The Lens Calendar Baby Green Heron Update - Day 27 A fascination with 4 baby Green Herons Finding Red Knots Epic Outer Banks Snowfall Backyard dredging and a first time-lapse Bad weather, Shipwrecks, Snowy Owls and Winter Fun Memories of an Outer Banks White Christmas and a Shipwreck A One Day Adventure to Cape Hatteras Point Sand hoodoos found on Ocracoke; Cormorants too
Keywords
outer banks obx photographs NC 2014 beach ocracoke calendar green heron nesting
Archive
January February March April May June July August September October November December
.
Powered by ZENFOLIO User Agreement
Cancel
Continue