The Outer Banks, along with much of the mid and eastern US, has been buzzing about this winter's irruption of Snowy Owls.  One was first seen at Cape Hatteras Point around Thanksgiving and there have been many sightings since (Avon, Oregon Inlet, Southern Shores, Ocracoke).  Peg and I traveled to Cape Hatteras, but we missed seeing it.  Then we walked all around Oregon Inlet and we saw a lot of other birders but no owl.  So when Peg had a meeting in Ocracoke on January 12th - we had high hopes of seeing one of the two still being reported there.

Sunrise brought rainy and windy skies as we headed for the Cape Hatteras Ferry.  The ferry schedule had changed giving us the opportunity to head to the beach near the Graveyard of the Atlantic Museum and head south.  Not far from the ramp we came across a big shipwreck part - not new, but new to us.  We'd driven the same section of beach at the end of November and it wasn't there then - but it was exposed now and made an interesting photo subject.  I've since done some web searching about it, but came up empty - it may be part of a wreck off of Frisco that drifted west, or just another wreck that comes and goes with the waves and sand. 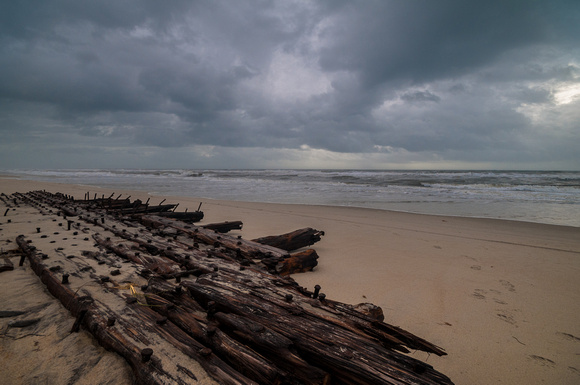 After photographing the wreck it was off to the ferry and Ocracoke Island, dodging torrential rain bands and strong winds along the way. The weather on Ocracoke was just as stormy but we headed straight to the beach using the ramp near the airport and drove south, scanning the beach and dune line for anything that looked like an out of place large white bird.  But no luck.  We drove all the way to the south point and back, and then all the way north to the end of the 4-wheel drive area, and there at the highest point of the dune, was a Snowy Owl - wow! Big, White, Beautiful.  As bands of rain continued to move in, we stayed in the truck with the window opened, took photos and watched.  We had no place to go and neither did the owl. 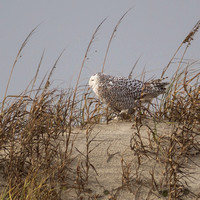 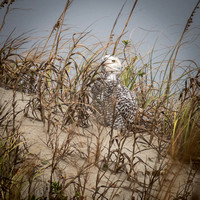 We would have stayed for hours, but Peg had a meeting with the Ocracoke Foundation (If you want to support Ocracoke, check them out).  I returned to the beach to look for the second owl and found it south of Ramp 72, again on the highest dune around - with a commanding view of the wide open beach.  The beach was different than our last visit, with no hoodoos to be found.  The tide was rising, and water everywhere including up against the dunes, and although I carefully guided the truck through the water to get close enough for a few photos, the owl was just too far away for a good shot.  So back I went to Owl #1 who hadn't moved.  There was even less light, but I captured a few more photos 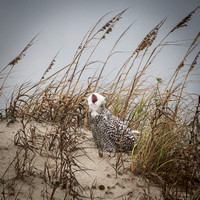 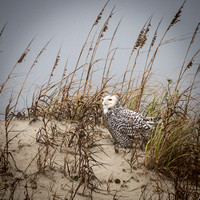 I left the owl to enjoy the rain and headed into the village where I did get a few nice photos of the Ocracoke Lighthouse, while the rain continued to pour. 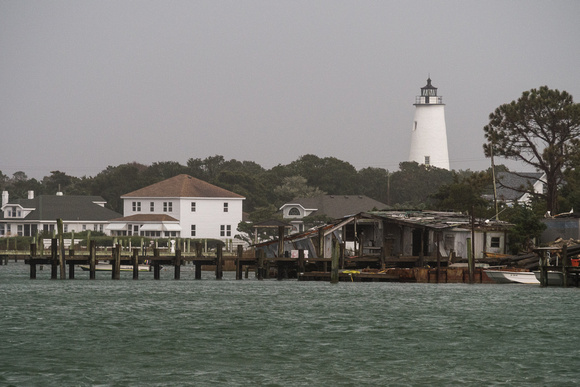 Ocracoke is wonderful this time of year, pretty quiet with just two hotels and a couple of restaurants open - which worked out just fine for us.  We stayed at the Captains Landing, good people and nice accommodations.  It rained all night with tornado warnings - but by Sunday the rain was gone and the winds were offshore.

I think we were the first truck on the beach while we waited for sunrise, but it wasn't too long before we met Bob and Robby, a couple of bird photographers from Virginia who asked us about the Snowy Owls - Peg told them where we had seen them on Saturday.  I was certain that Owl #1 would still be in his same place, but I was wrong.  After looking, we headed south, pausing to watch a Merlin scattering feathers everywhere as it munched on a small bird. 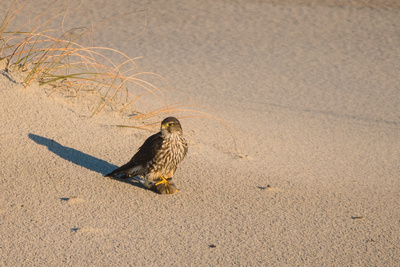 A Merlin and its preyA photo by Peggy Birkemeier

Past Ramp 72 we again met up with the Virginia photographers who had encountered one of the owls with some photo success - but this morning the owl was on the move landing briefly and flying - and we last saw it sitting on the top of the Ramp 72 sign before flying off into the dunes.  So we started looking for the second owl.  Bob and Robby went North, Peg and I headed south to the point, scanning the beach and dune as we drove.  No luck.

We made it to the point, then turned around.  We were alone, the beach was completely empty and conditions were windy, so imagine our surprise when we encountered a Snowy Owl out in the open beach, right in our path.  It saw us first and flew off into the 4-wheel drive, out-of-bounds area - too far for my camera gear.  Peg gave Rob and Bob a call and they headed our way.  Much to our chagrin,  the Snowy flew even further away, but landed nicely aligned with the Ocracoke Lighthouse.  Robby and Bob decided to "zoom with their feet" hoping to get close but not scare it.

The distances were big and it took them a long while, but they both got into nice positions.  I followed behind and got the shot shown here - its good, but distance and camera gear matter, so be sure to check out the great shot that Bob Schamerhorn got and also the one that Rob Sabatini took. The magic didn't last long and soon our owl was off and flying. 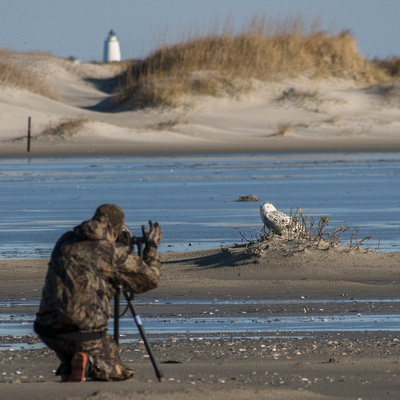 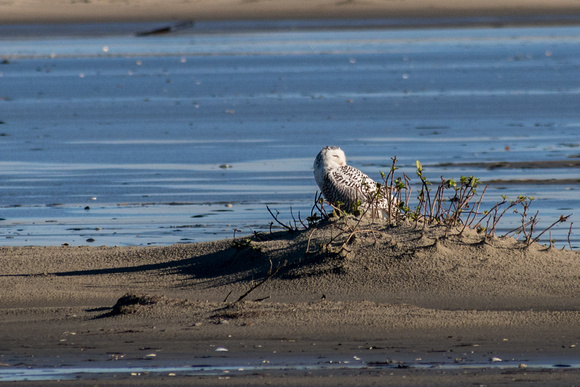 Peg and I had to check out of the hotel, after which we decided to make one last pass on the beach.  This time the owl was easy to find, holding court in the dunes with a growing group of birding photographers in attendance.  Our fascination with the Snowy Owls is universal - a visual treat for us all.  They won't be around long, so if you get an opportunity to see one - take it. 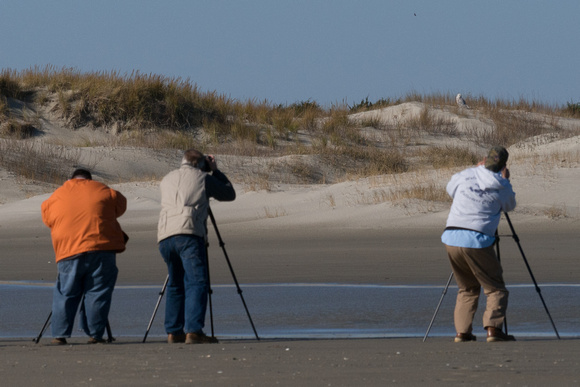 After flying back into the dunes, the Snowy Owl poses for the paparazziA photo by Bill Birkemeier

On our trip home we were pleased to see a new boat anchored in the marsh on Ocracoke, where one had been missing; one of my favorite seascapes is whole again. 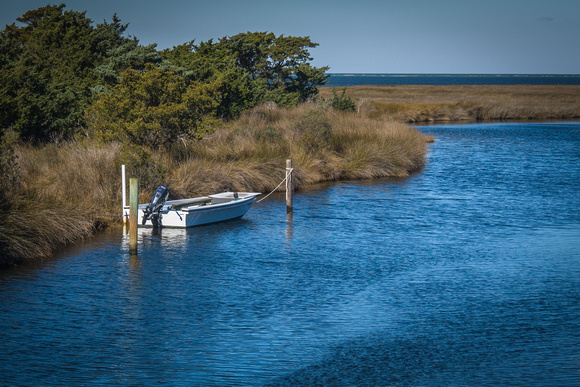 We drove to Cape Hatteras Point, no Snowy Owls (we looked), but spectacular intersecting waves breaking on Diamond Shoals. 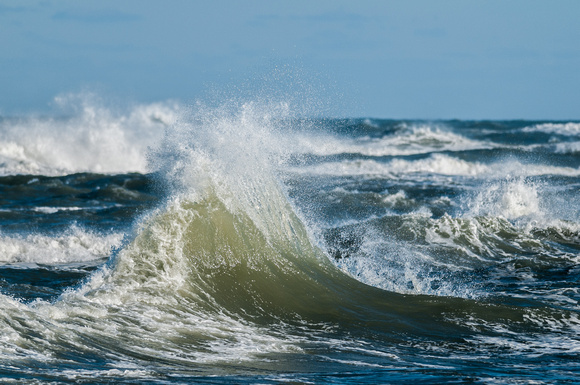 Lots of other action too including these Pelicans in flight with the lighthouse in the background.  A fitting image to complete our weekend. 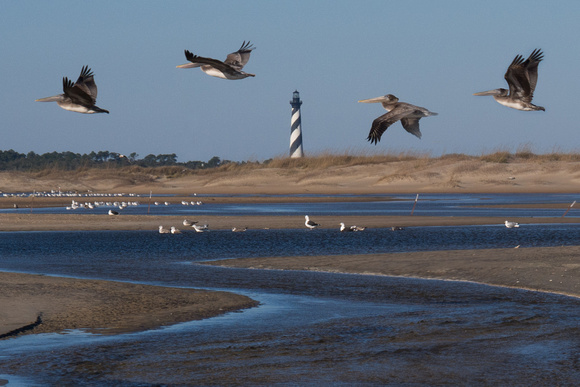